In the centre of Amsterdam, a beautiful cinema tells a story of Jewish life in the Netherlands in the early 20th century.

The Tuschinski Theatre - now known as Pathé Tuschinski - is now the only remaining venue of the entertainment empire of Abraham Icek Tuschinski who previously had venues in both Amsterdam and Rotterdam.

The Tuschinski was opened in 1921. Its interior and exterior are a mix of architectural styles - most often described as part Art Nouveau and part Art Deco.

Abraham Tuschinski was born near Lodz in Poland in 1886. Aged 18, he decided to emigrate to the United States with his wife Mariem Ehrlich. They followed a route taken by many at that time, travelling over land to the Netherlands, intending to cross the ocean on a ship departing from Rotterdam.

However, on their stop-over in Rotterdam, the couple decided to stay in the busy port-city. Abraham became a tailor, and later they both ran a boarding house mostly for Eastern European Jews, Hotel Polski.

Within a decade of settling in Rotterdam, Abraham had opened his first cinema in the city.

He converted a disused seaman's church to the Thalia cinema, which was open for 18 months until it was due to be demolished to make room for construction work. 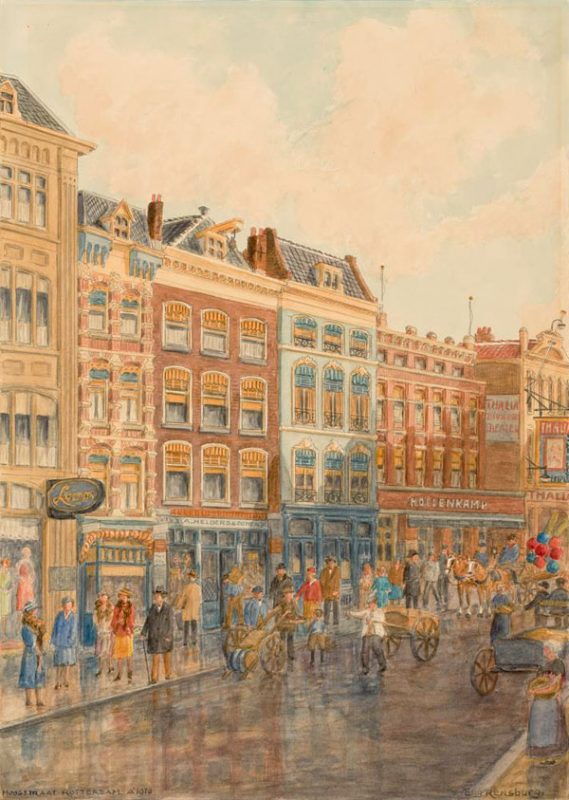 Hoogstraat Rotterdam, Eugène Rensburg, 1925, Jewish History Museum (Amsterdam), Public Domain (The Thalia cinema can be in seen on the right edge of the image)

Tuschinski moved this cinema to another location in the city, and within 13 years, he had built four cinemas in Rotterdam - the Cinema Royal, Scala and Olympia joining the Thalia.

EXPLORE MORE: Visit this gallery with views of Rotterdam

In 1918, along with his brothers-in-law Tuschinski bought land in Amsterdam on which the Tuschinski Theatre was built. The cinema was palatial, with opulent interiors and stylish settings. Attending the cinema became a full evening's entertainment, and could be accompanied by a visit to the adjacent nightclub, La Gaité.

World War II in the Netherlands destroyed Jewish life. During the war, the Amsterdam cinema's name was changed from that of its Jewish founder to the name 'Tivoli'.

Abraham Tuschinski and almost his entire family were murdered in the Nazi concentration camps. The city of Rotterdam was destroyed by Nazi German bombardement - none of Tuschinski's cinemas in Rotterdam survived.

However, the Tuschinski cinema in Amsterdam remains with the name of its founder restored. The cinema now hosts blockbuster and arthouse films, as well as special events such as film festivals.