From airport to artport: How changes in aviation policies introduced art to the airport

Brian Eno's Music for Airports not only became a starting point for the ambient music genre, but was also at the vanguard of another trend: that of increasingly integrating art in the airport landscape.

In Michel Houellebecq’s acclaimed novel „The Map and the Territory”, Jed, the protagonist, is visiting the arrival hall of the airport in Shannon, Ireland. Triggered by the spatial corridors and smart design he tries to imagine the atmosphere of the building during its first years, back in the 1940s. He elaborates about its past visitors: members of the societal elite, managers, architects of the post-war world.2

The opening of the Amsterdam - Hull airline, 1934 Netherlands Institute for Sound and Vision. Public Domain.

Back then, aviation was the privilege of the rich as, until the arrival of the first jumbo jets in the early 1970s, flights were exclusive and very expensive. Flying was also considered to be safe as aircraft hijacking hadn’t been that common before the late ’60s. In Jed’s mind, airports of the mid-20th century had a completely different vibe than they have today: no crowds, no security checks and, last but not least, no anxiety.

The first Boeing 747b Jumbo Jet of the KLM lands at Schiphol Airport, 1971
Netherlands Institute for Sound and Vision. CC BY-SA.

The improved affordability of flights from the Boeing era onwards wasn’t the biggest shift in the history of the airport, though. More impactful were the aforementioned terrorist attacks which resulted in more elaborate security measures, including luggage screenings, full-body scans, etc. Today it is hard to fathom that no more than a few decades ago, passengers could just walk straight up to the gate. In the United States procedures changed in 1973, when airlines were required to screen their clients and their carry-on baggage. The introduction of X-ray scans has indeed decreased the number of hijacked aircraft, but at the same time irreversibly changed the atmosphere of the airport. 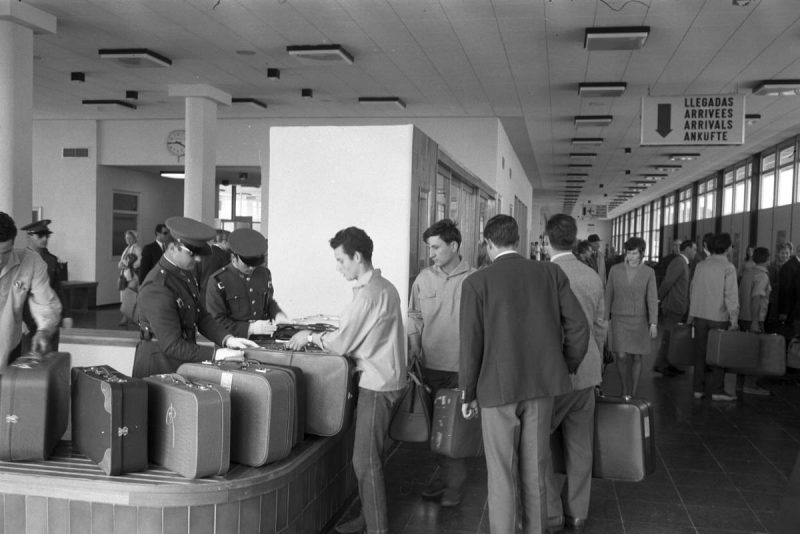 Therefore, it shouldn’t be surprising that when Brian Eno came up with the idea of recording his masterpiece Ambient 1. Music for Airports, released in 1978, he did so mostly with a view to defusing the anxious atmosphere of the terminal. This album - arguably one of the greatest in the history of ambient music - was inspired by a visit to the Cologne-Bonn airport and was intended to induce calmness and create space to think. 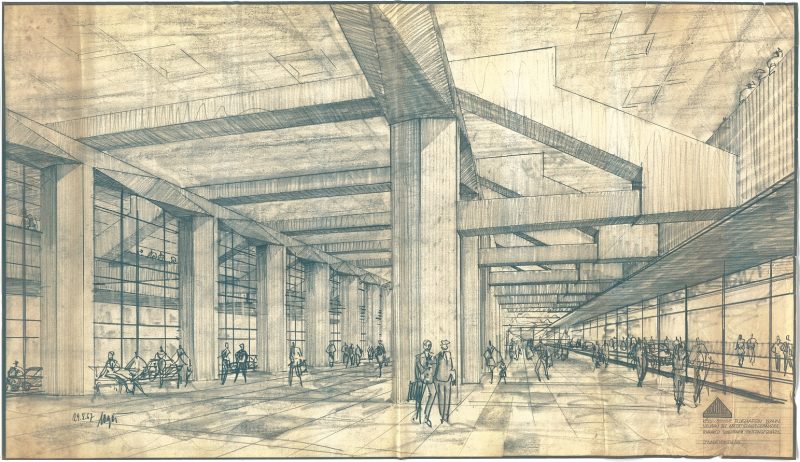 Used as an installation at LaGuardia Airport, New York, in the mid-80s, Ambient 1. Music for Airports is composed in a way that may reflect a variety of moods and atmospheres rather than to suggest any one in particular. The album not only became a starting point for the ambient music genre, but was also at the vanguard of another trend: that of increasingly integrating art in the airport landscape. 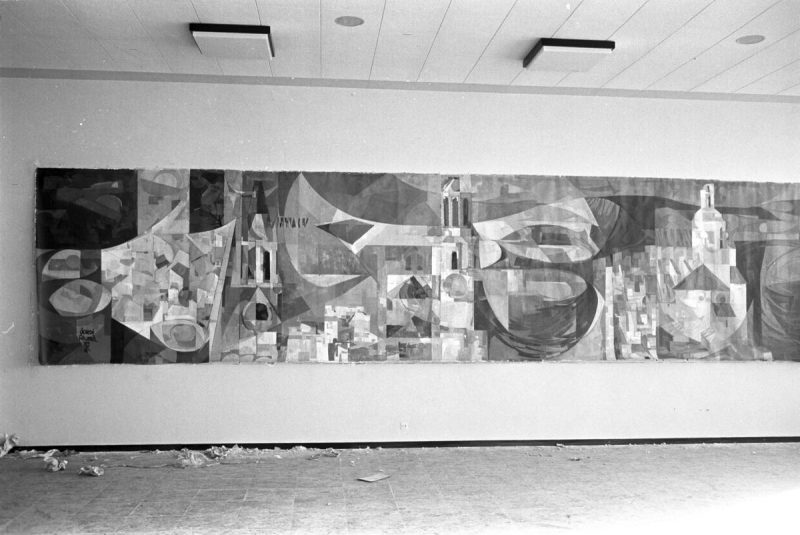 One could even say that, in recent years, many airports have turned into galleries. That makes sense for various reasons. Since 9/11 passengers – especially those on international flights – are required to be present at the airport much earlier for security reasons. Checking in takes more time also because of the larger number of operating airlines and their passengers moving around the terminals. Departure halls have become huge waiting rooms with not much to do. So why not encourage people to use the time to admire great paintings or sculptures? 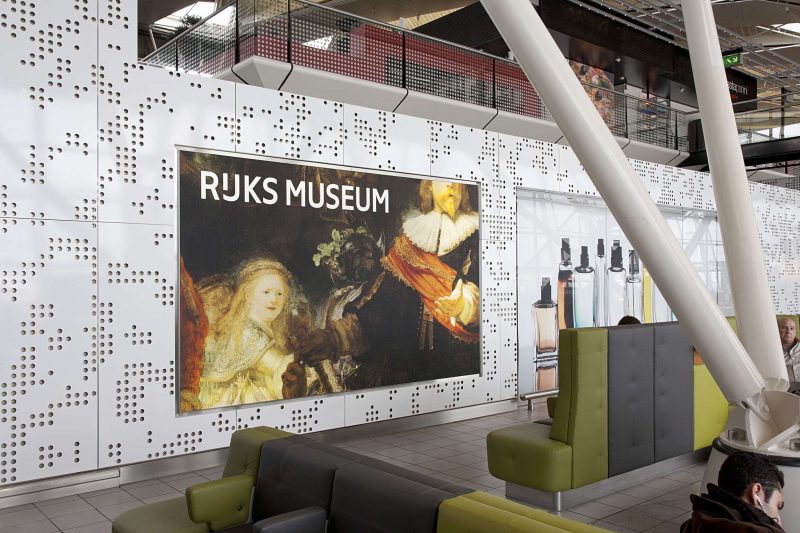 Poster with a detail of the Night Watch at Schiphol, 2013. Rijksmuseum. Public Domain

Engaging with art makes for a positive and inspiring pastime and helps to relieve any tension a passenger might experience before the flight. This idea has been elaborated in both permanent and temporary exhibitions at airports such as Charles de Gaulle in Paris, Schiphol in Amsterdam and Copenhagen Airport. 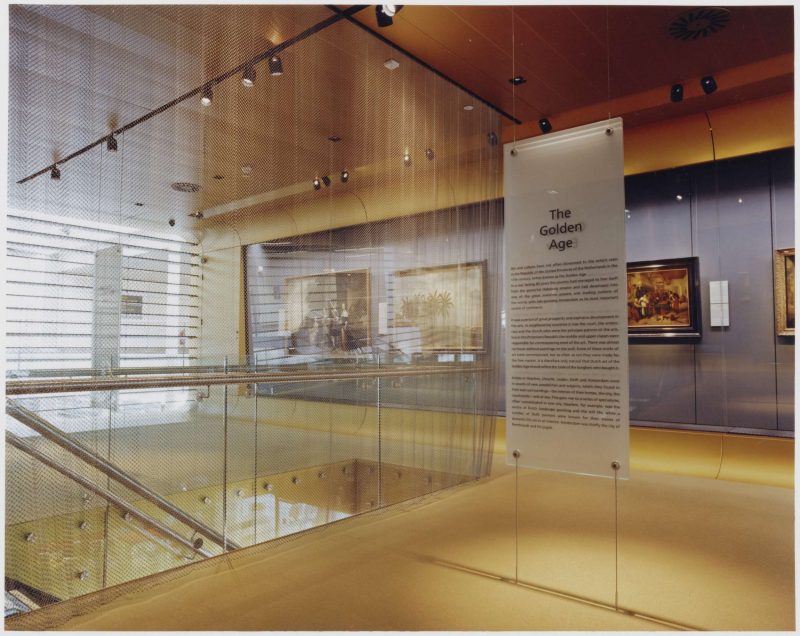 The permanent showcase of Dutch masters from the Golden Age at Schiphol, 2003. Rijksmuseum. Public Domain 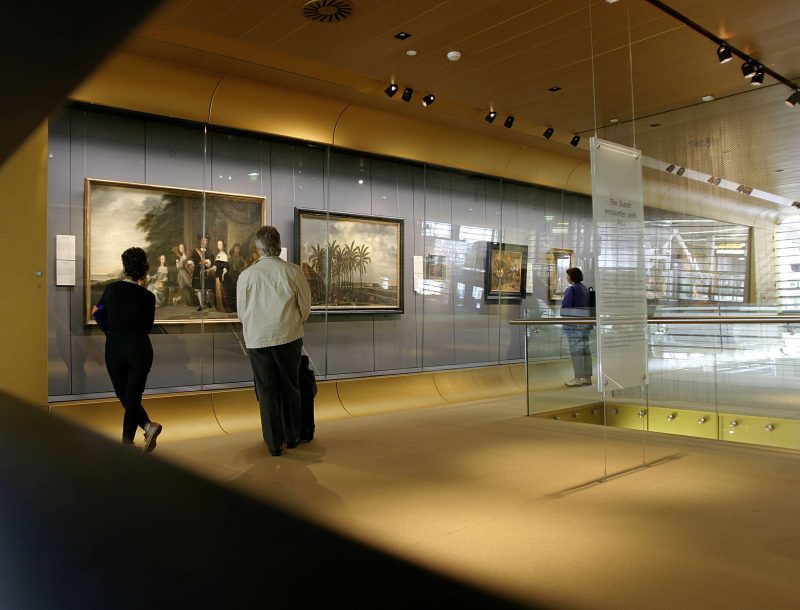 Next time you find yourself wandering between check-in counters and tax-free shops, pause for a minute to see if you can spot a piece of art. A thing of beauty is an excellent place to start any journey!

This blog is part of Europeana XX. A Century of Change, a CEF-project co-funded by the European Union that focuses on the 20th century and its social, political and economic changes.

Feature image: The exterior of the Rijksmuseum at Schiphol, 2003. Rijksmuseum. Public Domain