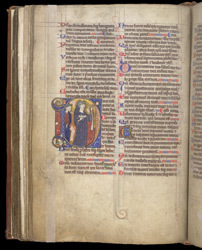 Various kinds of evidence in this Breviary shows
that it was made for Coldingham Priory, about 10 miles north of
Berwick-on-Tweed, in Scotland, perhaps at Durham: the abbey was a
cell of Durham Cathedral Priory. The manuscript was certainly owned
by a monk of Durham in the 16th century. Psalm 52 begins 'The Fool
has said in his heart, there is no God . . .', and is often
illustrated with an image …