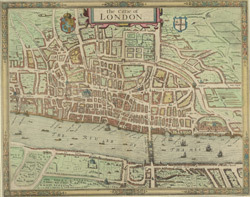 This map has been attributed to Augustus Ryther,
an engraver who prospered between 1572 and 1592, contributing to
Saxton's Atlas of 1579. This plan was produced to satisfy a
European market, and contains certain inaccuracies which a native
Londoner would not have tolerated. The streets appear very much
wider than they were in actuality. Houses are depicted as having
large gardens, when these had, …