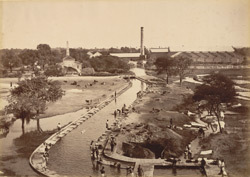 Photograph of mills at Hyderabad, Andhra Pradesh,
Curzon Collection: 'Views of HH the Nizam's Dominions, Hyderabad,
Deccan, 1892', taken by Deen Dayal in the 1880s. Hyderabad was
founded beside the River Musi in 1591 by Muhammad Quli Qutb Shah
(r.1580-1612) as an alternative to his capital at Golconda. Later,
Hyderabad became the capital of the Nizams of Hyderabad, who ruled
over one of the larges…