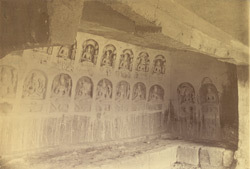 Photograph of rock-cut images of Jain
Tirthankaras in the Navamuni Gumpha, Khandgiri Hill, taken by
Alexander E. Caddy in 1895, from the Archaeological Survey of India
Collections. In the twin hills of Khandgiri, (or Khandagiri) and
Udayagiri, near Bhubaneshwar in Orissa, there is a series of Jain
cave temples called 'gumpha' locally, cut out of sandstone. Most of
these caves were excavated in the…