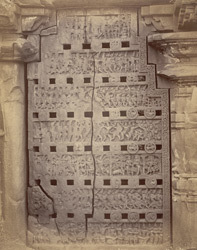 Photograph of a richly carved window, Narsapur
taken by Henry Cousens c. 1890. Henry Cousens was a civil engineer
who began working for the Archaeological Survey of India in 1875.
By 1895 he was working as the Superintendent of the Western Circle
and was responsible for the photographing and documenting of a vast
number of sites for the survey. Throughout his career and
especially in the early 189…