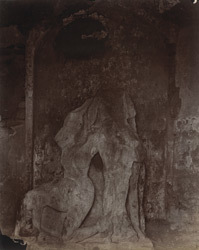 This photograph of a sculpture fragment was taken
by Joseph David Beglar in the 1870s and is part of the
Archaeological Survey of India Collections: Indian Museum Series.
It shows a fragment of an ancient statue of female figures, locally
called Astabhuji (eight-armed), from Bihar, Partabgarh District.
The town of Bihar is located thirty miles south west of Pratapgarh,
on the northern bank of an a…