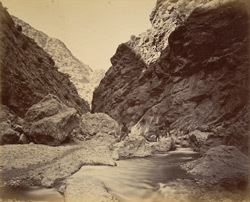 Photograph of the rocky defile below the Ali
Masjid fortress in the Khyber Pass, taken by John Burke in 1878.
Burke accompanied the Peshawar Valley Field Force, one of three
British Anglo-Indian army columns deployed in the Second Afghan War
(1878-80), despite being rejected for the role of official
photographer. He financed his trip by advance sales of his
photographs 'illustrating the advance fr…