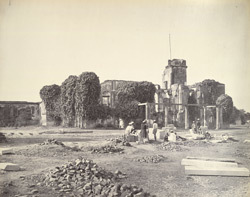 This photograph was taken by Samuel Bourne in the
1860s as part of an album entitled 'Photographs of India and
Overland Route'. It shows the ruins of the Residency at Lucknow.
This once elegant building was erected in 1800 by Saadat Ali Khan.
During the Indian Mutiny of 1857 the Residency Complex was the
scene of an epic siege of the small British garrison under the
command of Sir Henry Lawrence. …