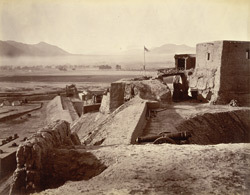 Photograph of Quetta, from the Macnabb Collection
(Col James Henry Erskine Reid): Album of Miscellaneous views, taken
in the 1880s. Quetta is situated beneath the slopes of Murdar in
Baluchistan at the northern end of the Quetta-Pishin valley at an
elevation of 5,500 feet above sea level. The military station was
designed by Sir Hugh Barnes and laid out on systematic lines of
which broad roads wer…