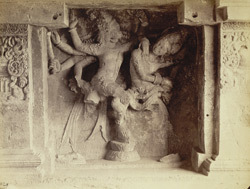 Photograph of a sculptured panel in the Hindu
Cave XV (Dasavatara) at Ellora in Maharashtra, taken by Henry
Cousens in the 1870s. Ellora is renowned for its series of Hindu,
Buddhist and Jain cave temples excavated into the face of a basalt
cliff. This cave was started as a Buddhist monastery, but in the
8th century was converted into a Hindu sanctuary under the
patronage of the Rashtrakuta king D…