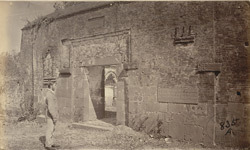 Photograph of the mosque of Pir Mullah Ataudin at
Devikot taken by John Henry Ravenshaw in c.1871. This view shows
the exterior wall, with a European figure standing in the
foreground examining an inscription panel set into wall. Ravenshaw
took four views of this shrine, and mentioned that the site had
been described in Martin's India. Such shrines were used as the
residence of a saint or 'pir' du…