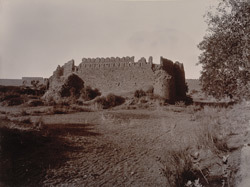 Photograph from the Curzon Collection, of a
fortified outwork at Dig, Rajasthan, taken by the studio of
Priyalall & Company in c.1900. Dig was established as the
first capital of Bharatpur state by the Jat king Badan Singh (ruled
1722-33), and the fort was built by his son Suraj Mal (ruled
1733-63) in 1730. It was square in plan, and was surrounded by
ramparts 8 km long which were extensively rein…