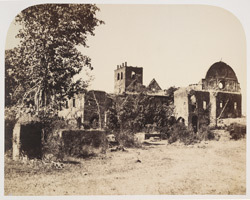 Photograph of the ruined Cathedral of St. John
from the north-west, in Bassein Fort, Maharashtra, taken by Charles
Scott in the late 1850s. Bassein is situated twenty-eight miles
north of Mumbai and was a Portuguese colony for over two hundred
years. The Imperial Gazetteer of India states, "during this time it
rose to such prosperity that it came to be called the Court of the
North, and its nobles…