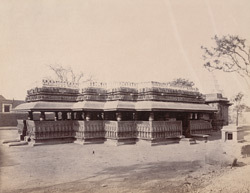 Photograph of a temple at Kundgol, showing the
mandapa in the foreground, taken by Henry Cousens in the 1880s.
Kundgol is situated in Karnataka, in what was called the Dharwar
district when this photograph was taken. In the Bombay list Kundgol
is described as being 20 miles south-east of Dharwad: "...A fine
old temple, more within the limits of Par than Kundgol; it is built
without lime, of highly…