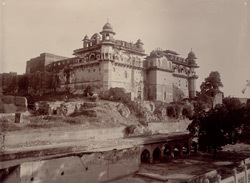 Photograph of Badan Singh's Palace in the
Lohagarh or Iron Fort at Bharatpur, Rajasthan, taken by the studio
of Priyalall & Company in c.1900. There are three palaces
within the fort, a citadel built at the north-west corner of the
walled city ofBharatpur by the Sinsini Jat king Suraj Mal
(r.1733-63). Badan Singh's Palace, also known as the Old Palace,
stands at the highest point and was built in …