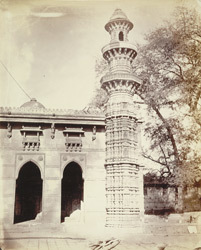 Photograph of the north minaret of Muhafiz Khan's
Mosque at Ahmadabad in Gujarat, taken by order of Major Cole, by an
Army sergeant in about 1881, from the Archaeological Survey of
India. This small mosque was built in 1465 by Jamail-ud-Din Muhafiz
Khan, who was a nobleman at the court of Sultan Mahmud Begarha
(r.1458-1511) and appointed chief magistrate of Ahmadabad in 1471.
The facade is pierced…