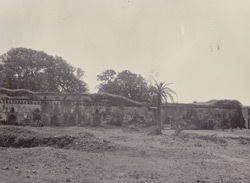 Photograph of the Natnagara ruins at Dhar, Madhya
Pradesh, taken by an unknown photographer in c.1902. The Malwa
region of central India was a stronghold of the Rajput Paramaras
from the 9th to the 13th century, with their capital at Dhar. They
were famed for their patronage of literature. In 1305 Dhar was
absorbed into the Delhi Sultanate by Alauddin Khalji. The region
began to develop a distinct…