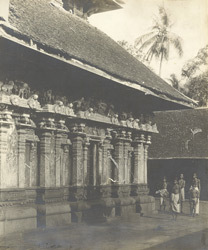 Photograph of the exterior of the sanctuary or
garbhagriha of the Thali Temple at Kozhikode (Calicut), Kerala,
taken by a photographer of the Archaeological Survey of India on
the 1st February 1901. The city of Kozhikode on the Malabar coast
was India's principal port for the spice trade, with Arab merchants
monopolising the trade by the 15th century. This was challenged by
the Portuguese when Vas…