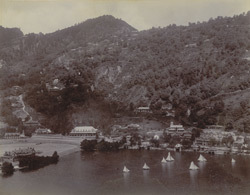 Photograph of the boats on the Nainital lake from
the Macnabb Collection (Col James Henry Erskine Reid): Album of
views of 'Naini Tal' taken by Lawrie & Company in 1899.
Nainital takes its name from the sacred lake at its centre. The
area of the Kumaon Hills had come under British rule after the
Anglo-Nepal War (1814-16) but it wasn't until 1841 that P. Barron
built the first European house there.…