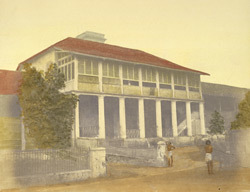 Photograph by Frederick Fiebig from an album of
70 handcoloured salt prints, of a merchant's office in Colombo, Sri
Lanka (Ceylon). Fiebig, of German origins, was active in Calcutta
as an artist and lithographer in the 1840s. Little is known about
his life, but turning to photography in the late 1840s he produced
hundreds of photographs by the calotype process, frequently
handcolouring them. His p…