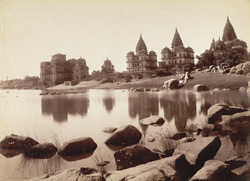 Photograph of the cenotaphs of the Orchha Rajas
on the Betwa River at Orchha, from an Album of Miscellaneous views
in India, taken by Deen Dayal, c.1882. Orchha was founded as the
capital of the Rajput state of Bundelkhand in Central India by Raja
Rudra Pratap (r.1501-31) in 1501. The citadel is situated on an
island in the Betwa river. This is a view of the cenotaphs, or
memorial chatris, of the …