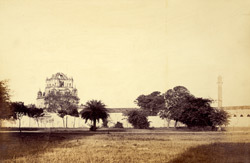 View of the building from the rear, partly
obscured by trees, photographed by Reymond Hervey De Montmorency in
1867. La Martiniere (also known as Constantia) was built by the
frenchman, Claude Martin (1735-1800) in 1795, though he died before
its completion in 1802. This example of European architecture later
influenced the developement of hybrid Indo-European architecture in
Lucknow in the 19th c…