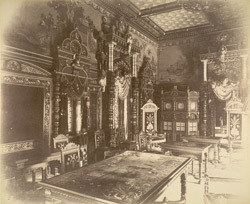 Photograph of the library at Lakshmi Vilas Palace
in Baroda, Gujarat from the Curzon Collection, taken by an unknown
photographer during the 1890s. An immense structure, the palace was
built for the Gaekwar Sayaji Rao III (ruled 1875-1939) and was
reputedly the most expensive building erected by a private
individual in the 19th century. Originally designed and begun in
1880 by Major Charles Mant (…