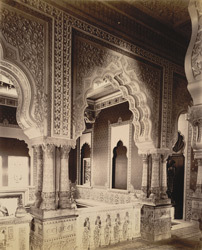 Photograph of a stairwell in Lakshmi Vilas Palace
at Baroda, Gujarat from the Curzon Collection, taken by an unknown
photographer during the 1890s. Originally designed and begun in
1878 by Major Charles Mant (1840-81), the palace was completed in
1890 by Robert Fellowes Chisholm (1840-1915). Both architects were
pioneers of the Indo-Saracenic style, an orientalist fusion of
Eastern and Western for…