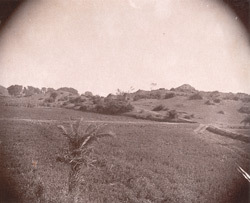 Photograph of a landscape view near Nalanda, in
Bihar, taken by Alexander Caddy in 1895. Nalanda was originally
famous as the sanctuary of Shariputra, one of Buddha's followers.
It was visited by Buddha and Ashoka, the Mauryan Emperor, however
there are very few archaeological remains from this early period.
Nalanda soon became a major centre of Mahayana Buddhist studies and
by the 7th Century sch…