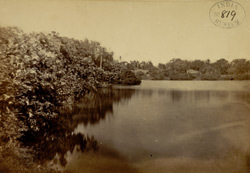 Photograph of the Khas Nagar Talao, Sonargaon,
near Dhaka in Bangladesh, Archaeological Survey of India
Collections, taken by W.Brennand in 1872. The province of Dhaka was
brought under Islamic rule in the 13th century, first by the Delhi
Sultanate then by the independent sultans of Bengal, after which it
was taken by the Mughals in 1608. Sonargaon was once the capital of
Eastern Bengal from the 1…