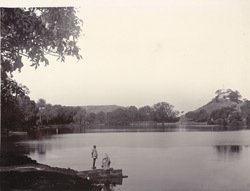 Photograph of the Kalika Temple at Dhar, Madhya
Pradesh, taken by an unknown photographer in c.1902. Dhar was once
the capital of the Paramaras, a Rajput dynasty which ruled the
region of Malwa in central India from the 9th to the 13th
centuries. It was famous as a centre of culture and learning. The
dynasty began to decline in the 13th century and Dhar finally fell
to the Delhi Sultanate under Al…