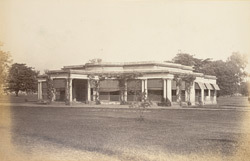 This photograph of Honeymoon Lodge from the
'Walter Hawkins Nightingale (PWD) collection: Album of views of
Calcutta, was taken by an unknown photographer in the late 1870s.
Barrackpore, fourteen miles from Calcutta, was originally a
permanent barracks, but when Marquess Wellesley took over the
Commander-in-Chief's residence, in 1801, he decided to make
improvements to the area. As well as buildin…