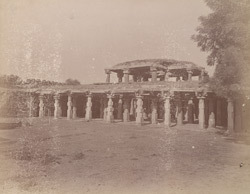 Photograph of Karim-ud-Dins mosque from the
Archaeological Survey of India Collections taken by Henry Cousens
in the 1880s. The Karim-ud-Din Mosque is situated in the south east
part of the citadel and dated 1320 from an inscription, it is the
earliest dated mosque in Bijapur. It is built with reused material
taken from old Hindu structures. The entrance porch is the mandapa
of the temple already …