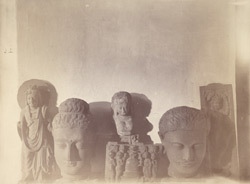 A somewhat faded photograph of Buddha and
Bodhisattva statues and a slab showing stupa worship from the Swat
valley, taken by Alexander .E Caddy in 1896. The ancient kingdoms
of Udyana (Swat) and Gandhara (Peshawar) corresponded fairly
closely with the northern part of the North West Frontier Province
and the sculpture of the area, referred to as Gandharan, was
influenced by Graeco-Roman elements.…