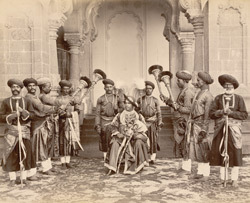 Seated portrait of Shahaji Chhatrapati, Maharaja
of Kolhapur with attendants, taken by an unknown photographer,
1894. Kolhapur, situated on the banks of the river Panchaganga was
the capital city of the former princely state of the same name in
Maharashtra. In 1675 it was conquered by the Maratha chief Shivaji
and the Maharajas of Kolahpur were descended from his younger son.
The British obtained …