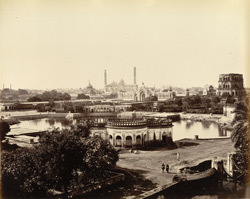 Photograph of the Husainabad Tank and Satkhanda
taken by John Edward SachÃ© in the 1870s. Lucknow is the state
capital of Uttar Pradesh in northern India. It came to prominence
under the Mughals and during their rule became a flourishing centre
for the arts. Supported by the wealth of the royal court many fine
palaces, tombs and mosques were erected, mostly dating from the
mid-18th century onwards…