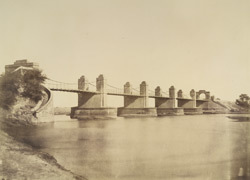 Part of a portfolio of photographs taken in 1858
by Major Robert Christopher Tytler and his wife, Harriet, at Delhi,
Lucknow and Cawnpore in the aftermath of the Uprising of 1857. This
is a photograph of the Hindan Bridge,Ghaziabad close to Delhi. The
Hindun River was the scene of a battle between the British and the
insurgents in May 1857. The insurgents were trying to prevent the
British moving …