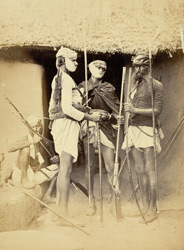 A group of four men of the Purriar Meenas tribe
in Rajasthan, photographed by Eugene Clutterbuck Impey in the early
1860s, from the Archaeological Survey of India Collections. In the
19th century the Government of India commissioned a series of
ethnograhic photographs of different tribes, races and castes.
Capt. E.C. Impey of the Bengal Staff Corps was appointed to cover
the areas of Delhi, Agra a…