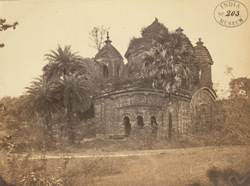 Photograph of the Shyama Raya Temple at
Bishnupur, taken by Walter Campbell around 1869. The temples of
Bishnupur were built under the Malla rulers of Bengal, fervent
adherents of the the Vaishnavite movement which flourished in the
area from the fifteenth century onwards. The Shyama Raya temple,
built by Ragunath Singha in 1643 AD, is a 'pancha ratna' or 'five
towered temple'. It has a typical Be…