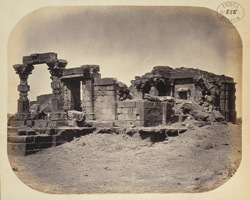 This general view of a temple at Dhotra, Buldana
District, Berar was taken by Robert Gill in 1871 and is part of the
Archaeological Survey of India Collections (India Office Series).
The site of Dhotra has some temples built in the Hemapanti style of
architecture which flourished in Central India under the Yadava
dynasty in the 12th century. They consist of a sanctuary, 'mandapa'
or antechamber, a…