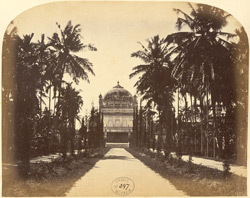 Photograph of the Tomb in Seringapatam,
Karnataka, from the Archaeological Survey of India Collections:
India Office Series (volume 23: 'a' numbers), taken by Henry Dixon
in the 1860s. Seringapatam, a small town near Mysore, is an island
fortress surrounded by the Kaveri River that was ruled by Haidar
Ali from 1761 to 1782 and then by his son Tipu Sultan until his
death in 1799. The mausoleum depi…