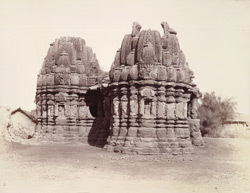 Photograph of the old temple at Kasara, Gujarat,
from the south-west, taken by Henry Cousens in the 1880s, from the
Archaeological Survey of India. The small village of Kasara is
located 14 miles north-west of Patan in Gujarat. This temple at
Kasara, which dates to the 12th century, has a triple-shrine plan
and an octagonal shaped mandapa or columned hallway. Each shrine is
devoted to separate div…