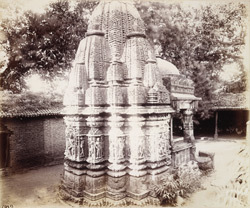 Photograph of the Someshvara Temple at Ghurad in
Gujarat, taken by Henry Cousens in the 1880s. In the
'Archaeological Survey of Western India, vol. IX' of 1903, Burgess
and Cousens wrote, "Here is a small old sculptured temple in a
walled enclosure, dedicated to Somesvara Mahadeva. Part of the
basement is now buried below the present ground level; the porch
appears to have been rebuilt, and is now…