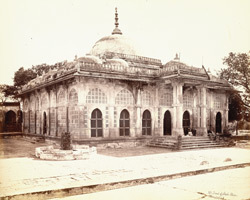 Photograph, from the north-west, of Shah Alam's
Tomb at Ahmadabad in Gujarat, taken by Henry Cousens in the 1880,
from the Archaeological Survey of India. Shah Alam's tomb was built
in 1485 by Taj Khan Nariali, a noble in the court of Sultan Mahmud
Begarha (r.1458-1511). The tomb, or dargah, is one of a complex of
buildings, including a mosque and the Jamaat Khana, or Audience
Hall, situated two m…