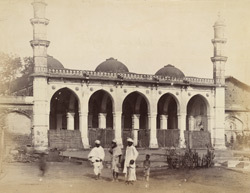 Photograph of Hidayat Baksh Madrasa Mosque at
Ahmadabad in Gujarat, taken by Henry Cousens in the 1880s, from the
Archaeological Survey of India. James Burgess writing in 1905 in
the Archaeological Survey of Western India, VIII, states "The
Ahmadabad Qazi's mosque is a very small stone building of the
beginning of the eighteenth century. It has an inscription giving
the date. The Hidayat Bakhsh Mo…