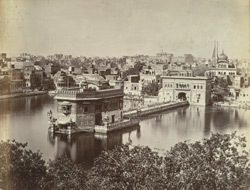 Photograph of the Golden Temple at Amristar,
Punjab, taken by William Henry Baker in the 1865. Amritsar was
founded as the holy city of the Sikhs in 1579 by Ram Das, the
fourth Guru. The city was named after the sacred tank, the Amrita
Sarovar or Pool of Nectar. Beside this large rectangular tank sits
the Golden Temple or Hari Mandir, which is the holiest of the Sikh
gurudwaras and contains the Ad…