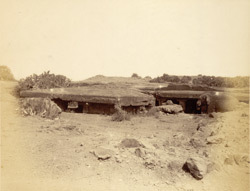 Photograph of the Jogai Mandir Cave Temple at
Amba Jogi, taken by D.H. Sykes in 1875-76. The town of Amba Jogi is
located in the modern state of Maharashtra. In his report of the
operations in Western India in 1875-76 James Burgess wrote, "There
have been a number of cave temples also, Brahmanical and Jaina, of
which the most entire remaining is known as Jogai's Sabha
Mandap...It is cut in a coars…