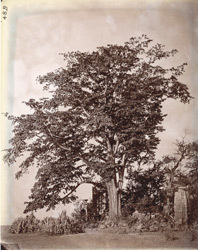 This photograph of some small temples at Deoli
was taken by Joseph David Beglar c.1872-73 and forms part of the
Archaeological Survey of India Collections (Indian Museum Series).
At the time this photograph was taken, Beglar noted that: "...the
small village of Deoli, so named from a group of temples still
standing under a superb karan tree. The temples appear to have been
Jain...The main temple i…