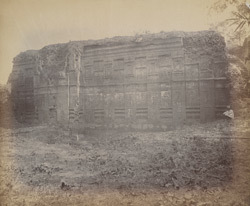 This photograph was taken by Joseph Beglar in the
1870s for the Archaeological Survey of India. It shows the late
fifteenth century Darasbari mosque in Gaur in modern-day
Bangladesh. The building is also known as the mosque of the
'madrasa' or teaching hall that was once apparently attached to the
building. The mosque is now ruined but still displays a great many
ornamental designs executed in ter…