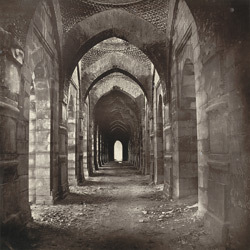 Photograph taken in the 1860s by John Henry
Ravenshaw, one of 45 prints in the album 'Gaur: Its Ruins and
Inscriptions'. View looking along the faÃ§ade of the Bara Sona
Mosque in Gaur, a derelict city in the Malda district of Bengal.
Once known as Lakshmanavati or Lakhnauti, Gaur was an ancient
capital of the rulers of Bengal. It came to prominence under the
Buddhist Palas from the 8th century, an…