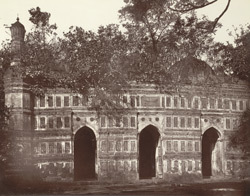 Photograph taken in the 1860s by John Henry
Ravenshaw, one of 45 prints in the album 'Gaur: Its Ruins and
Inscriptions'. The ruined city of Gaur is located on the
India-Bangladesh border in the Malda district of Bengal. Previously
known as Lakshmanavati or Lakhnauti, the city was an ancient
capital of Bengal, a seat of the Budddhist Pala dynasty from the
8th century and later the Hindu Sena dynast…