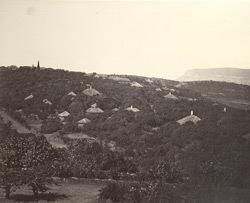 This print showing a view of Mahableshwar was
taken by an unknown photographer in the 1860s. It forms part of an
album entitled 'Photographs of India and Overland Route'.
Mahableshwar was the summer capital of the Bombay Presidency during
the British Raj from 1828 onwards, and largely developed under the
patronage of General Lodwick. It is located in the Western Ghats, a
range of hills in the mode…